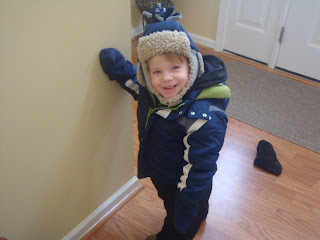 We are really loving our new parent/infant educator, provided to us through Ohio's Regional Infant Hearing Program. Unfortunately, she is one of two people who services well over 80 families in this area and therefore only get to see her for one hour each month. Yesterday was our second time to see her, but really our first true therapy session. Even though Aiden was slightly under the weather, he performed beautifully. He responds very well to Miss N. and I can tell he really likes her.
She started with testing the lings and Aiden responded each time by holding the chip up to his ear, listening, and then dropping the chip into the empty diaper wipes case (great idea for reuse). Holy crap. We just may have this conditioned response thing down. I can only hope it carries over to the soundbooth in a couple weeks when we go back for another mapping.
After reviewing our previous month's activities (eating, sleeping, and going down the slide) with Aiden, she brought each item out (the Little People, the bed, the table, and the slide) and would say, "Oh, the boy is hungry. He wants to sit down and eat" or "Yawn, the boy is tired. He needs to go to bed." Sure enough, for the most part, Aiden performed each scenario correctly. He's getting it. He's not repeating much, but by golly, he's taking it all in, and he's getting it! He even gave us a couple spontaneous "bowwwn" (down) as he slid the boy down the slide (in which we always say "wheeee", but in which he refuses to say - grrrr).
The highlight of the day was a sound discrimination activity using musical instruments. We have never done this with Aiden before and both Miss N. and I were amazed at how quickly he caught on. She started by bringing out two cow bells, talked about them ("one for YOU and one for ME", "look, they're the SAME", "LISTEN to the sound they make"), they'd play them together, and she'd say, "Okay STOP! *pause for silence* Now, put the bell down." Then put hers away, out of sight, but left Aiden's in front of him. Next she brought out some wooden sticks, then shakers and repeated above.
After introducing each instrument and its sound to Aiden, she went behind a chalkboard with her set of instruments, while all three of his were still in front of him. She would then play one of the instruments, without showing him, and prompt Aiden to identify the instrument by picking up the his instrument making the same noise. The first couple times around, she had to play the sound, show him which instrument the sound was coming from, then I'd guide him to pick his up and play it all while talking about how the sounds were the same.
He quickly picked up on this game. By the third round, my little monkey was LISTENING to each instrument sound (and pointing at his ear when he heard it) without seeing the object, was DETECTING what the sound was, then was IDENTIFYING and choosing the instrument to reproduce the same sound he just HEARD!

Another SIMPLY AMAZING moment on our journey to help Aiden hear.
at 7:27 AM 3 comments: 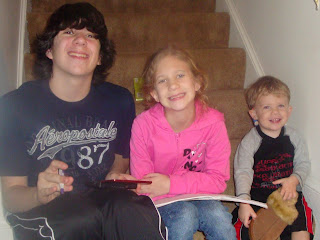 Aiden's older brother and sister have always played a huge role in helping Aiden hear and speak. They are not only great language models through their everyday interactions with Aiden, but two of his biggest advocates. Anytime they have a new friend over, the first thing they do is introduce Aiden and explain his cochlear implants before the person even has a chance to ask. They are very matter of fact, to the point, and PROUD.
Now of course, they still have that typical "sibling love" and get tired of me asking, "Can you please play with your brother while I do (xyz) and make sure you ..." and before I can get it all out, they finish my sentence with a big sigh of UGHness, "I know mom, talk to him."
Ahhh, for the love of siblings.
Now the one thing I have decided to start doing more of is including his brother and sister in some sit down therapy at home. As Aiden's getting older he responds to and imitates them much more than he does me, so we make it a fun game. Kailyn is especially great at this because she loves the praise of being such a "GREAT TEACHER" and "AWESOME BIG SISTER", whereas Ryan is like "whatever mom", but every once in awhile I can convince him to put his cell phone down and make his mommy happy.
Ok ... little side note:
As any parent to a CI/hoh kiddo will tell you, one of the biggest achievements is getting your child to:
1) repeat the Lings (ah, ee, oo, s, sh, m) back to you during the ling sound check, and
2) perform a conditioned response when they hear a ling (or tone played in the soundbooth) - or what is also referred to as "listen and drop". For example, when practicing the lings with Aiden, I will hold a block (or Lego or chip or ring or bouncy ball etc) up to my ear, say the ling, watch for his response, say, "I heard that", repeat the ling, then drop the block or whatever into a bucket. The goal is to get Aiden to do the same, so that when he is being tested in the soundbooth during an audiology appointment and hears a sound, he can show he heard the sound by placing a ring on a stack, a peg into a peg board, any object into a bucket ... anything of the like to tell the audiologist, "HEY, I HEARD THAT SOUND!" It just makes for easier soundbooth time AND provides the audiologist much better information for exactly what the child is or isn't hearing so they can adjust their map accordingly.
So, today I opted to solicit Kailyn to help me out with the Lings for the first time in quite awhile. Now, get this. When I do the lings with Aiden, he'll entertain me and play the "listen and drop" game, but RARELY repeat the Lings. Check this out (and listen closely to the /s/ and /sh/ ... he's been playing with both these sounds lately, but has never repeated them for me; and make sure you turn the music off on the left first).
Note: I was testing the right implant alone. I had to remove the left completely, because if I just detach the coil, he puts it right back on! Love it!

After the boring ling checks (which I have to do while he's in his chair or I get NOTHING in return), we always have some fun, so Kailyn turned up the tunes and they jammed to some music. I have NEVER seen Aiden dance like this. What I love most is that he's imitating Kailyn plus busting out his own moves. Plus, he notices when the music stops and asks for more! Absolutely love it!

(This is not captioned since it is just Hannah Montana's "Ice Cream Freeze" playing in the background, Kailyn singing here and there, and them dancing)


Guess I need to get his sister involved a lot more often! Thanks for being such a great big sis Kailyn! Just like you're dancing, you rock!
at 1:15 PM 6 comments:

Loving Me Some Laurie Berkner

Ever since Aiden was a baby, I have always sang to him. Even if he couldn't hear me, I still sang. I didn't want to lose the habit of singing, because I knew one day soon enough he'd hear his mommy's voice singing sweet nothings into his ear.

Then he got his CIs and I really sang. Everything I did, I sang to him (if I couldn't think of something to sing, I sang whatever it was I was doing to the tune of Row, Row, Row Your Boat or some other catchy tune). I narrated our activities through song. And I still do.

I also downloaded tons of songs from iTunes and one of my favorites is Laurie Berkner. Back last summer, when Aiden was about 5 months post activation I would play songs from the computer over, and over, and over again. I'd pull out the speakers and turn up the music full blast. I'd pick him up and dance with him, sing to him, and try to make him dance.

Nothing. Nada. Nilch. Zero. Not even little tike be-boppin' moves.

and I received nothing from him for a good while (well, he'd do motions for me to my songs, such as Twinkle, Twinkle or Patty Cake, or my own lovely "narration" tunes). Finally in November, I ordered the Laurie Berkner DVD. I figured maybe if he SAW them dancing, he'd do the same. He loved it, but still wouldn't dance. In fact, not only did he not dance, he just wanted to SIT and watch the video and give me crazy looks as I danced around like a fool in my living room trying to get him to do the same.

That was two months ago, and not only is my little monkey finally getting up off his bottom, but he's LISTENING to the words then IMITATING the actions even when his back is turned from the tv screen! He's PREDICTING what's coming up next, by HEARING the tune and the words, and PERFORMING the actions before some words are even sang! and best of all, HE'S STARTING TO DANCE!

Laurie's music is so AWESOME. She has totally taught Aiden what turn around and shy are and has helped me with teaching him many other GET UP AND MOVE verbs, animals, how to high five, AND has a lot of the LINGS throughout her music. In fact one of my favorite songs from her is Walk Along the River, because the chorus of it is all "oo-ah's" which "oo" is one of the lings Aiden still does not say. Not to mention her tunes are just catchy (I find myself singing them in my head way too much) and Aiden's finally catching on.

Once again, I'm truly amazed by the miracle of CIs. Yet another check on the list of things my son wouldn't be able to do without them - hear music. Check him out.
(make sure to turn off the music to the left)
(I am in the process of captioning ... it's mainly Laurie Berkner singing throughout)

On the same note, him and I also TRIPLE LOVE the Tune-Ups CD from the Listening Room on the Hearing Journey website by Advanced Bionics (this site also has great activity ideas - even if your child doesn't have AB, you can still sign up and access the Listening Room). The program was created by a Speech and Language Pathologist along with a Board Certified Music Therapist for young children with hearing loss. It's integrates language, music, and listening and is so much fun to sing and perform to.

Aiden doesn't realize just how much therapy he's getting through all this music, and to me, that's what it's all about! What are some of your favorites to listen and dance to?
at 12:37 PM 7 comments: 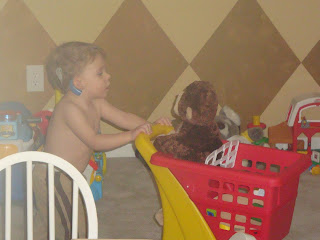