and yet some more Out of the Booth mapping

There's not too many CI moms I know out there that would be happy to walk out of the sound booth with this audiogram (top line = left ear and bottom line = right ear): 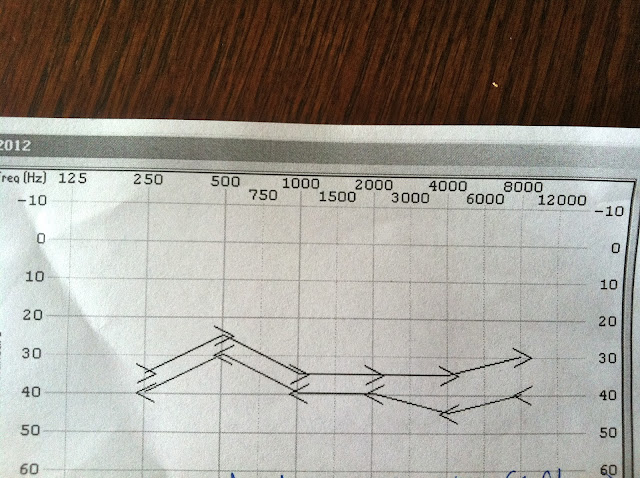 now look at the speech banana and mentally place his audiogram in it (and remember, anything above the connected lines, he CANNOT hear). 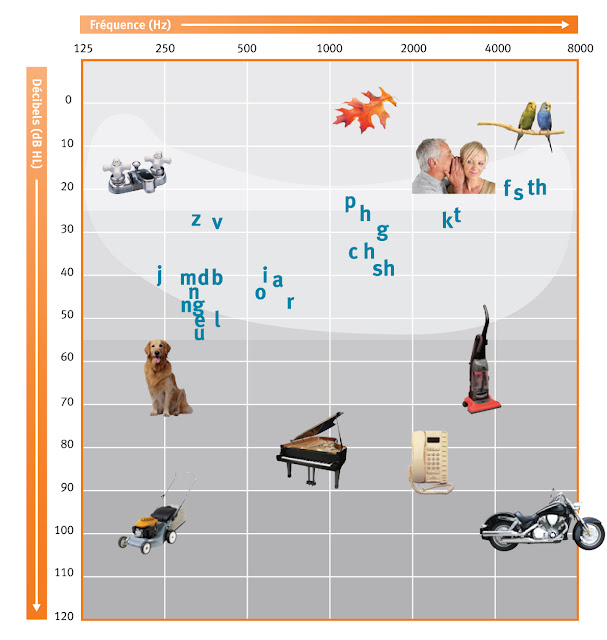 not good. at all.

but, if you were a fly on the wall in the booth with us, you'd know why I am quickly learning to take his audiograms with a grain of salt. Bottom line,

Aiden does not perform well in the soundbooth. period.

How can I take this audiogram too serious when this same little boy can repeat each the six ling sounds with me (each ear alone) standing 10-12 feet behind him and speaking them at just above a whisper? According to this audiogram, he's far from hearing the /s/, and pretty darn close to barely hearing the /m/ or /sh/, yet he can imitate them and uses them all in speech pretty perfectly. Now, he has been dropping his /p/ and the endings of words (t, ed, s, k), and his audiogram does show this. But it's not a great representation of what he is truly hearing.

Aiden clams up in the booth. When he's not sure of himself, he does nothing. He's not one to sit still. He knows what he's supposed to do, but shows his power. He does great on the NUCHIPS (a speech perception test where he has to repeat back a spoken word) and even did sorta ok on the HINT (hearing in noise test where a sentence is presented in noise and listener has to repeat it back. He scored 49% on this, not good, but not bad for first time ever taking it). Listen and drop to pure tones? ya, whatever. He'll hold that block or marble or peg or whatever it is to his ear for.ever. Goldfish, he eats them. m & ms, chocolate melting all over. Stickers, sometimes, but just for a bit. Marbles, he's shaking the can (and when we move it, he reaches out to touch it just to hear it make the slightest noise, on purpose, then looks at us with that grin, again, showing his power). Tones mean no.thing to him and so it is very hard to get a true solid audiogram.

Leaving the booth I was terrified at the thought of the changes they were going to do to his maps, but once we got to her office, I saw right away she was all ready to test him herself, by having him imitate back the different phonemic sounds which make up the words in our language.

and by doing this, she verified that he is actually hearing the /s/, /ah/, /sh/ and /g/ among a few others, and that he really is missing the /p/, /k/, /t/ and /f/ among a couple others. She'd then map him based on his imitated responses and test him again to confirm.

(a little funny by my wee entertainer - as the audiologist was asking him to imitate a sound, she noticed aiden was watching and responding by which letter her finger was on instead of giving the sounds based on hearing. After a good laugh, she had to pick up her paper so he couldn't see which letter she was wanting him to imitate. She didn't realize mr. smarty pants knew all the sounds of the alphabet).

By the time she was done he imitated back a /th/ and /v/ sound! Now, he may not be able to perfectly voice these sounds in words (saying a sound in isolation is a little different than putting it together with other sounds to produce words), but the fact that he can near perfectly imitate them back, tells me something that his audiogram doesn't - HE IS HEARING ALL THESE SOUNDS!

Here are a couple other posts about this out of the booth mapping experience.
We have gone round and round with his maps since six months post activation. Some would blow it off that he just doesn't use his CIs as well as others, that he needs more time, that he's just a "late talker" a "boy" and that "he'll get there". Well, I don't have time to wait and see when it comes to my child's hearing and spoken language. I've learned, when a child isn't performing at a level they should be, first things first, CHECK TECHNOLOGY. and for this reason, we started this phonemic "out of the booth" mapping. We needed to know that Aiden had a good map before slapping another diagnosis on him. Yes, Aiden does have additional {small} challenges, but by golly, this has been heaven sent, and at least now we KNOW he has a good map to better tackle his other challenges; we KNOW he's hearing all the sounds in order to put them together and into words; we KNOW what he is hearing is what he should be hearing.

and if that's not enough for ya, based on the Goldman-Fristoe 2 Test of ARTICULATION, Aiden has made:

12 months progress with his speech sound production in a matter of five and a half months!

Oh THAT IS AWESOME! I love that your audie can think outside the box, so to speak. Do what works!

Hurray for you and Aiden!

I'm brought to tears remembering when this journey started with his MAP at JTC. I so want to give you a hug, pour you some wine and sit on the balcony of those JTC apartments and talk...face to face.

Tam, you have always had the mama's gut when it comes to Aiden...you know him inside and out. He is making awesome progress because of your diligence and love. You know in your heart of hearts what works for him and never, never second guess yourself.

He is making great progress; and you and Mike are making the right decisions for him...so I pour you now a virtual glass of wine (a big one because it is almost 5pm my time) and give you an internet hug.

Tell Aiden that Thomas sends him a big hug, too. One day...we will be able to hug again in person! Hugs and love...Kat