We've been in Wisconsin now for almost two weeks. We spent every moment possible coming and going to/from my grandparent's house and Aiden getting to know his great grandparents. What fun times ... I love the fact that my kids get to know two of the best grandparents a person could have! They mean the world to me and having them a part of my children's lives as well is a dream come true! I love the fact too that they can see the amazing technology of Cochlear Implants at work. They are in awe of the whole thing ... they are in awe of how busy and into everything Aiden is. More to come later.

Then, for the last three days I took all three kids to Glacier Canyon Resort in Wisconsin Dells. What a blast that was! My younger brother, Uncle Kevin, came too, and helped out with the crew. Unfortunately, my husband doesn't have all the vacation time we'd like him to have, so he's missing out on a lot of this, but will be meeting us here in about a week. WE MISS HIM SO MUCH! ... especially mom! I realized at the park how spoiled I am on vacations. He always lets me relax, soak up the sun, and drink my pool side drinks while he entertains the kids. None of that this time, but it was for the kids and I had a blast entertaining (and was so thankful for Uncle Kevin) ; )

I forgot the USB cord specifically used with my camera back home, so I'll post pictures and recaps when I get home.

Just being in Wisconsin has been a wondrous world of sound for Aiden. The birds are constantly chirping, there are lakes all around, laughter and I love yous from family, airplanes flying overhead, old style train tracks with trains constantly choo-chooing by (he heard his first train the other day and we were only feet from it - his look of course was priceless), big trees and flowers and big black ants and so so much more to talk about. and the best thing of it all .... NO THERAPIES - NO APPOINTMENTS - NO DISRUPTIONS! We needed this break and we're all enjoying every minute of it!

Now tomorrow we're heading out with my mom for our annual camping trip! No tents here - just a real nice trailer with all the necessities for a city girl in the middle of nature (with very little technology capabilities). We'll be off for the next week and a half, tubing, boating, soaking up the rays on the beach, playing with the kids in the sand, taking nature walks, enjoying long talks with my mom over morning coffee as we listen to the same woodpecker peck at the same metal sign over and over again, relaxing and enjoying life. I.LOVE.IT!
at 9:57 PM 3 comments:

For the Love of Listening

As all moms know, the toddler stage is not an easy one. Hearing the word "no" is one thing, but actually "listening" and comprehending it, then stopping what they're doing makes a mom's life just that much easier!

Aiden is a VERY active one year old and truly into every.little.thing that he should not be. My mom and grandparents laugh at how busy he is and how he finds things he shouldn't. I couldn't imagine if he didn't have his cochlear implants. With everything that he is into (and of course "everything" he loves has nothing to do with his toys), I would be on the run way more than I already am. I am amazed by how Aiden not only hears me, but that he understands me and stops whatever it is he should not be doing ... well, for the most part anyway.

Repetition is key to teaching a deaf child to learn to listen. Well, "No" is definitely one word that I am constantly repeating, day in and day out, so there's no wonder the boy understands it so well!

Here is a video of a couple times I was able to grab my camera in time before having to yell out "Aiden, No!" 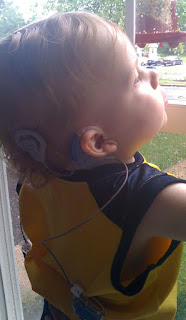 My baby rocked it out in the soundbooth! When they played the first tone though, Aiden looked right over at the rabbit, which I have to admit is a bit "Chucky doll" like, and started to scream. (FYI about the soundbooth - tones are played at different frequencies and when Aiden responds to a sound, they reward him with showing him that scary rabbit in a box playing an instrument. I keep him distracted by showing him pictures in a book or playing with some toy so he's not just watching and waiting to see the rabbit). We thought he'd shut down after that and I'd have to reschedule, but he manned up and we finished the soundbooth WITHOUT showing that scary rabbit anymore!
Aiden's left ear has not only caught up with the right, but surpassed it by 5dB! So Aiden is hearing at 15 to 20dB across all frequencies and his speech awareness threshold is at 10dB - in both ears!!!!
Yep ... 10dB! This is the same baby who had NO RESPONSE on his ABR at 120dB! This is the same baby who couldn't hear a jet airplane (without his CIs), if he was sitting right next to it. This is the same baby who I worried and fretted (and truly continue to do so) over for the past year wondering if he would truly hear my voice one day.
and now he's hearing my whispers of sweet nothings. my whispers of I love you.
AMAZING. JUST SIMPLY AMAZING.
After the soundbooth I talked to our audiologist about my concerns with Aiden's expressive spoken language. He will imitate the /ah/ and /m/ sounds, is starting to babble a little bit more (ba-ba's, na-na's, a-ba's, "mar" for more) but still not as much as we thought he would by now. She explained how important the receptive (listening & comprehending spoken language) part of learning to speak is; that with everything we "feed" into Aiden's little brain, it is more important right now that he is comprehending what we say instead of him just constantly repeating what we say. The better the receptive base, the better the expressive spoken language. She also reminded me that hearing babies hear and take things in for a good 9 to 12 months before their first words ... and Aiden's only three months hearing.

She continued, "For example, we know Aiden understands when you say "airplane" because he'll sign airplane", and as soon as she said it, Aiden looked at her, smiled, and signed airplane and belted out a good "aaaahhh" (without her signing it). We just laughed and clapped! One example of how we know Aiden is not only hearing us, but comprehending what we are saying to him.
After our Hopkin's appointment, Aiden and I headed down to the Baltimore Harbor to have lunch with a family from Texas. I "met" the mom through the Yahoo group CICircle. They were in town to have their youngest son's second CI reimplanted by the same surgeon who performed Aiden's. This was going to be the little boy's third surgery on this ear and they had almost given up hope until finding Hopkins. This mom and I talked via email for a few weeks before their trip. Being from Texas, I was so excited to meet up with them. The one thing I did not know, until the night before, was that this little boy's mom and dad were both Deaf as well (I found this out as she called me through relay). All this time I have been communicating with hearing moms of deaf children ... I guess I hadn't really even thought of what I'm missing out on, until now anyway.
As I was very excited to meet them, I was nervous at the fact that 1) my signing abilities are next to none - except for the handful of baby signs we use with Aiden (well I can fingerspell, but that doesn't make for the easiest of conversations); and 2) I couldn't believe I had just then realized the very few contacts I have with Deaf parents with D/deaf children. I have to admit that I was relieved when my Texas friend communicated orally and was a great lip reader. She helped me through conversations and signing with her husband AND made me realize I needed to learn a lot more signs.

What an experience it all was. Absolutely wonderful. Both mom and dad are part of the Deaf community and I was intrigued by their life story and the decision they made to get their two youngest boys bilaterally implanted (their oldest child is hearing) although neither mom nor dad have any type of aided hearing (mom is possibly considering a CI herself but wants to take care of her kids first). It tore my heart apart for her that she didn't have a lot of support from friends and family within the Deaf community who were anti-implants. She has been through a lot, but fully believes in what she wants for her boys and keeps trucking along. I admire her for her strength and perseverance.
We are going to meet again this summer when they fly back up for activation. I can't wait! I found my visit with them to be heart warming, a tiny glimpse into Aiden's world, as well as into the Deaf community ... I can't help but imagine everyday what it would be like for him without CIs or truly, what it's like to be Deaf. It's nice to meet and befriend people who are there. Thanks for an enlightening time!
at 2:00 PM 8 comments:

Take Me Out to the Ballgame ...

... take me out to have fun! One of my favorite things to do as a mom is watch my kids play sports. And I LOVE Ryan's baseball games! This year has been tough getting to see the whole game though since I chase Aiden around everywhere, but in the same breath I'm loving all the great listening and learning opportunities there are at the ballpark! Even better ... Aiden's responding to them!
We usually start off like this ... clean and happy and strapped in. But not for long. 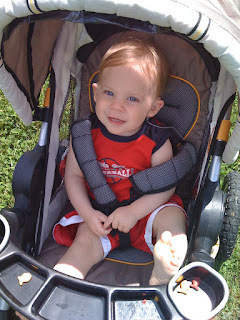 and once he's out, mom doesn't see much more of the game!

Before too long something catches Aiden's attention and like Houdini, he makes his way out.
This time it was a dog.
The licking, petting, and barking, the soft fur ... Aiden loved every minute of it.
and no, we're not getting a dog. 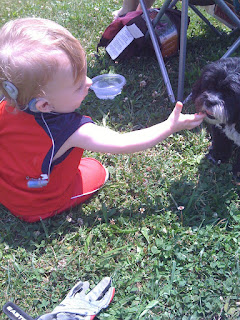 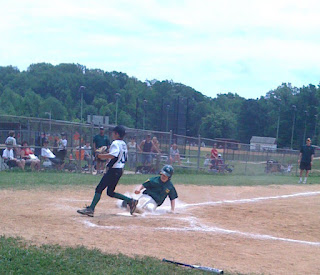 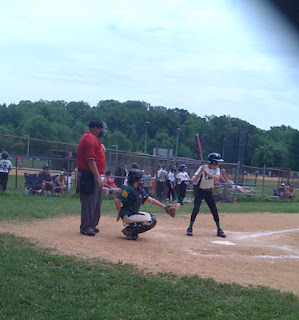 Two other great vocabulary words we get in at EVERY game are "in and out". To keep Aiden entertained (because toys just don't do the trick), we let him take everything OUT of the cooler and his diaper bag, then he puts it all back IN. 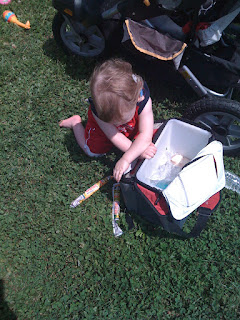 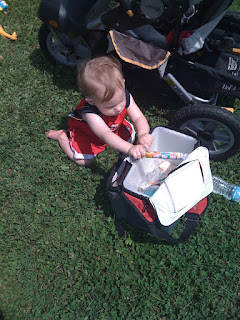 The highlight of this day in particular was when Aiden heard the airplane. He's heard them before, but has never looked up on his own without me prompting him to listen. As soon as the plane flew over I just watched and waited.
and my little man looked right up in the sky ... he was in awe.
"Yes Aiden! You hear an airplane! ahhhh-ahhh-ahhhh-ahhh!" 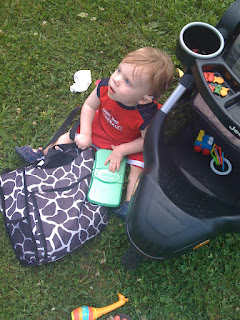