I LOVE the dollar aisle at Target. They always have the neatest things - from chip bowls, to cute holiday platters, to THERAPY toys! All typically TWO BUCKS or less. 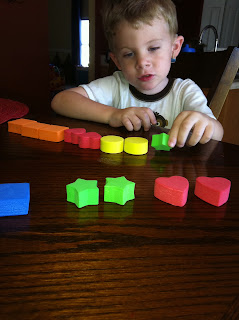 I picked up these foam shaped blocks for a dollar a couple weeks ago. They have become Aiden's favorite thing to do and we have spent countless hours of therapy play time with them.

Here are some language goals that we're currently working on with Aiden:

and some auditory goals:
In addition to these, there's also OT, speech goals, speech babble, cognitive etc to think about. The more you can do to incorporate all into one lesson, the better ... and these $1 foam blocks, did just that! 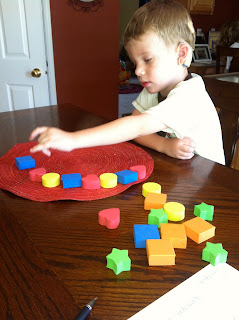 Aiden creating his own pattern
ALL FOR A BUCK.
at 10:02 AM

Wow, those are GREAT ideas!! I love the idea of building towers with the blocks to recall 4 critical elements in a message. We have some little wooden blocks - I'll have to try that one at our house!

You are such a great mom - and creative, too!!!

See, this is why we need to start our own school! You are always full of creative ideas to promote language. Hugs and love!

we bought those foam shapes a target too, and Kemper loves them. Thanks for the extra ideas using them!

wow YOU ARE AMAZINGGGGGGG!!!! This is such a great idea. so glad he is doing well :) lots of hugs

Wow, so creative! It's amazing what you can squeeze out of one set of blocks. Now you've got me brainstorming about foam blocks.

I also LOVE the dollar bins at Target! We bought some great flash cards there a while back. I'll have to look for those foam shapes! Thanks for posting this - it's so helpful to read about what you do with Aiden and it gives me ideas for Sophie as she gets older. You are such a great mommy and teacher! :)

Thanks for some fantastic ideas Tammy! You could put any kindergarten teacher to shame. Our TOD frequently picks up stuff from the Dollar Store to work on with Ava. They have the best stuff there. Ava also frequently says "Ava" instead of I or my. Now you've given me some great ideas on how to emphasize the first person with her.

Hi!
I was searching in the Internet for the definition of "post-noun elaboration," since I am from Argentina and some Tests my mother buys (she is a speech therapist, (phonoaudiologyst here)) are in English. She translates them, but sometimes there are specific topics that can have a literal translation and not an ideal one for her work. That's why I wanted to ask you what the Post-noun elaboration is?
Thanks and sorry if my English is not good.