It has been absolutely beautiful out! And gorgeous weather = parktime! We went the other day after A got out of school (have I mentioned how much I LOVE having my afternoons back with him!). As I sat back and watched him, I was amazed at how far he's come gross motor wise. There is NO.THING better for OT and PT challenges than the.PARK. Last summer he made leaps and bounds (which I attribute to all our park visits), but watching him on this particular day I was amazed how he was a madman running, climbing, and all over the place with NO falls! 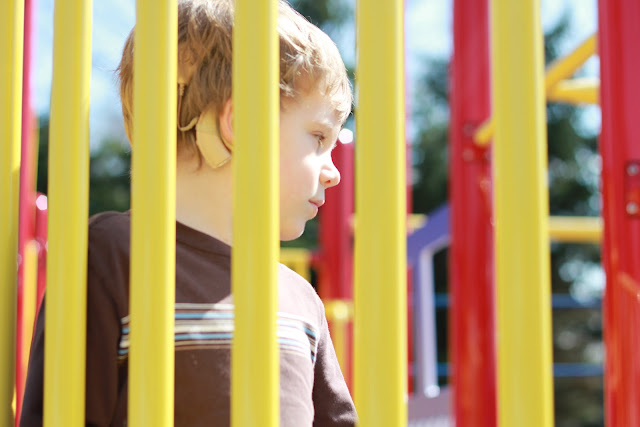 This same day, a little boy came up to Aiden and asked, "How old are you?" Aiden looked him right in the eye and belted out (with great confidence), "I four years old!"

Okay - first off, he's three for a few more days, but I loved how he wanted to take this stance of "I'm a big boy and can hang with the big boys"; and second, he typically never looks at, much less talks to, any strange child or adult without me urging him to answer back. This momma was smiling ear to ear.

A couple days before, I got all three of my kids to come outside and enjoy some fresh park air. Ryan and I played a few good games of tether ball while K & A played hide-n-seek and ran around. 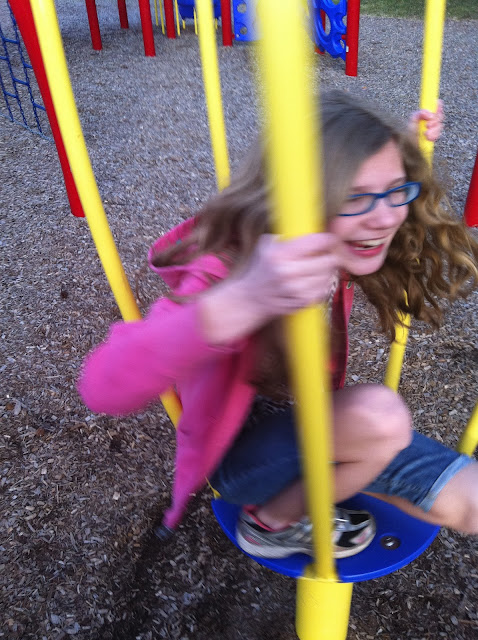 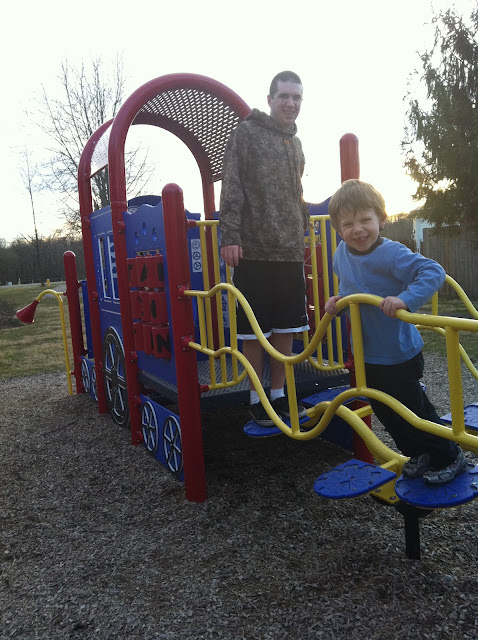 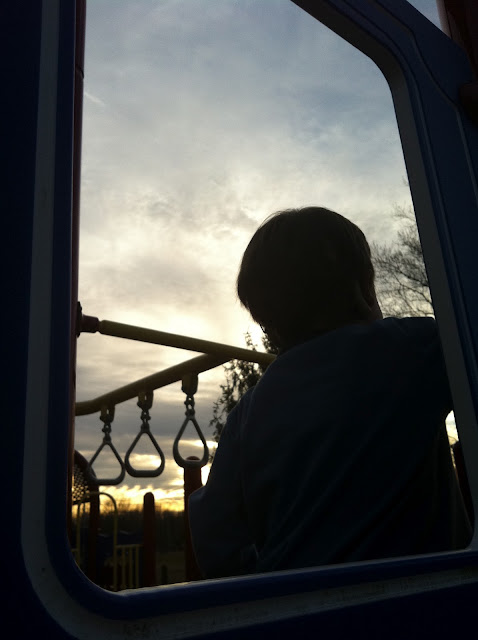 we played 'til the sun went down
(then went out for chocolate shakes!) 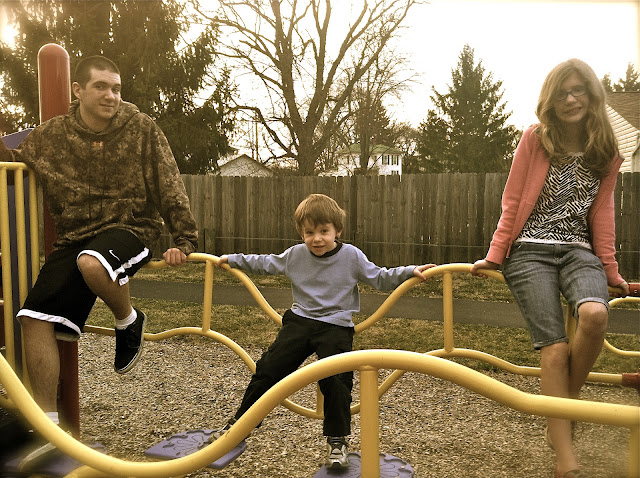 
Hope you are getting to enjoy some sun-shiney rays too ... perfect therapy for the mind & soul.

Email ThisBlogThis!Share to TwitterShare to FacebookShare to Pinterest
Labels: life with Aiden, siblings

I want to start this by saying THANK YOU to three special CI mommas, my sister-in-law (who is also a TOD), and a pretty awesome AVT who truly helped me through this difficult decision. Your support, advice, and guidance meant the world!

I could go into many details, but bottom line,

...not everything you are told or learn or see is the right thing for your child. Everyone has a different hearing journey and this was not the first time I've had to remind myself, this is Aiden's journey. We tried. We wanted it to work (because it was supposed to). But it wasn't, and the time for change was now.

The oral preschool Aiden attended is a good school for many kids, but it wasn't the right fit for Aiden. He left at 8am and didn't get home until 4pm. By the time he got home, he was worn out; him and I had no time to work together due to me starting my part time jobs right about the same time - taxi driver (aka soccer mom), tutor, cook, among many others.

So even though we were told time and time again, that an auditory oral environment with teachers of the deaf teaching the class would lead Aiden to be mainstreamed by kindergarten, we pulled him.

because it's definitely not the only option of reaching our goals for him.

OBSERVE. Just because they say it's the right placement and what your child needs, doesn't mean they'll thrive. I observed MANY times through a two-way mirror, and it was there that I sat and cried as I watched my lil' darling barely talk, not interact much, not do much at all except attend. It hurt my gut.

RESEARCH ALL OPTIONS. In the meantime, I visited (and observed) many preschool classes trying to find the best fit for Aiden. I knew he needed more of a free-choice/centers, get up and move type environment in order to build his social and expressive language. He is a sensory seeker and it takes a lot of input (physical movement) to get output. But he also needed an environment that was at least somewhat acoustically appropriate to start with. He needed a place where I could tell they were ready to embrace his hearing loss and learn all about it, about him (believe me, you can tell who wants to take on the task and who doesn't). Options are a good thing. I didn't rule anything out. Oh, and be OPEN MINDED. Just because they've never taught a child with a CI doesn't mean they can't.

COMMUNICATE. I voiced my concerns with his then teacher and SLP. But the best thing I did was make an appointment with our district's special education DIRECTOR. Not the intervention specialist, not the psychologist we typically dealt with, the director. We had an hour plus conversation about Aiden, his needs, and what his least restrictive environment (LRE) looked like. We agreed he was not currently placed in his LRE and what my options were to fix this. We talked about how we could prepare him NOW to be ready for kindergarten in their district with very little needs outside of an FM. We defined what it would take to make him successful now, not later. I asked her if she'd help me get the district to pay for this LRE (if it so happened to be a (private pay) mainstream preschool).  She said absolutely, then asked if I would come work for her (and later followed up with an email asking if I would help them become a district who didn't have to send their kids with hearing loss out).

I have to say, this meeting was huge. We connected. We chatted. We talked about Aiden's future. TOGETHER. No politics, no IEP in our face, no my side/your side. Just two people with a similar interest. After this meeting, I gained a whole new respect for our school district's special education program. I learned they don't have to be the enemy, they can indeed (and should always be) an integral part of the team. Sometimes it means taking that first step/effort to make it happen.

In the end, we didn't move him to one of these "private pay preschools" that we considered his LRE. No, we broke another rule we learned early on and moved him to our district's special education preschool. Yep. I said it. The special education preschool. I didn't want to speak it aloud, as the just "sound of it" seemed like a huge step back. Yet it's not. It is honestly above and beyond; a place that will meet and exceed his current needs. It's not the same one I toured last year (and I was very open and honest with the director about why I would never put my child in that particular preschool), but a different one that I promised the director I would tour along with other preschools. There were a couple private pay preschools that I would've loved to send Aiden to, IF there weren't 20 kids in the class. Too many too soon. This placement is a perfect transition from 4 in a class to over 16 in a class. Maybe next year.

and here's why we chose his new school:

We will see how this goes. So far, he loves it. I love it.

In the first week:
I could attribute this to many things, (shorter days, being around such great language models, not as tired, more physical activity to get that input and motors running).

Two other big things that have come out of nowhere this week:


Coincidence? Maybe. or maybe he's just that much less stressed with his new daily routine. I know I am.
at 8:53 AM 12 comments: