I'm in the middle of writing a long overdue (as usual) update on Aiden, but just had to come share a special moment shared by him and me this morning.

Early this morning, as everyone else slept, Aiden and I sat on the couch snuggling, me trying to search for Christmas ideas on the internet, him trying to get me to play Candy Crush on facebook. I don't even know what started the conversation, but we started talking about being deaf, hearing aids, and cochlear implants. He understands he's deaf, he knows that not everyone needs CIs to hear, and honestly, he never says much about it. He loves his technology and at times, even prefers to be without.

"I want to make a video. I'll say how I hear with cochlear implants and why I love them. and about (being) deaf."

This March will be his FIVE year hearing birthday.

and what a perfect project to work on together.

In the meantime, a little flashback to his first year hearing video - From Silence to Sound.

Just a couple hearing loss articles I came across that I thought would be beneficial to give to schools, teachers, day care providers, etc. to advocate for our kiddos.

I came across this one and then realized it is written by Leah over at Say What! I absolutely love her writing! So informative, so detailed, and I think this one is especially great for those people new in your child's life who need that basic understanding of what hearing loss looks like and sounds like.

This second one I stumbled upon from a hearing loss group I'm a part of on Facebook. I've never heard of this blog, but I'm going to search through it as I always love reading about hearing loss from a deaf adult's perspective to give me a better insight into Aiden's world. In this article, he writes about concentration fatigue. With Aiden starting full day kindergarten this fall, it's that something that's been weighing on my mind as I know he's just going to be whooped by the time he gets home. I thought this is a great article to share with educators as well.

Email ThisBlogThis!Share to TwitterShare to FacebookShare to Pinterest
Labels: articles for educators, cochlear implants, hearing loss in the classroom, school

This is so exciting! It's not available in the US yet, but just the fact that Cochlear has had two upgrades in the short four years that Aiden's been hearing is just amazing to me! Now let's just hope that our insurance agrees! 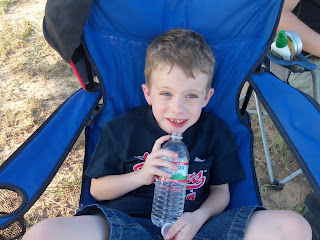 to start this blog back up (and catch up on everyone else's!), even if it's been over six months since my last post.

So I've vowed since it is summertime, to sit and have journaling time for my kids, and for me.

Time to get back into our journey.

and since the last time I posted (in November 2012), we have

Needless to say, I've been non.stop.busy.

But it's time to stop, and catch up.  I have so much to write about.

Aiden's journey continues. At his own pace, with his own special needs. We're still climbing that mountain, with obstacles along the way, but we're getting there. We're on the right track and I feel good about where we're at.
at 11:35 AM 3 comments: