Next Steps After Concerns ... and a little "h" 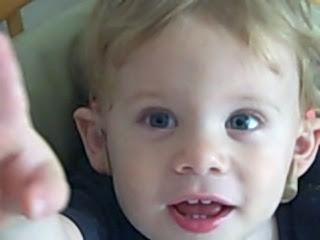 After posting my concerns about Aiden's standstill I received a lot of great feedback, so first let me shout out a huge THANK YOU! All my CI mommy friends rock and it is so nice to know there is support/words of encouragement/advice out there from those who have been there done that! Second, these comments confirmed my inner mommy concerns, so I scheduled a meeting with the audiologist at Aiden's school for a second opinion.

The audiologist here did reassure me his audiogram was not bad, but that if he was in the 15db to 20db range, across all frequencies, that dropping to 25-30db, was something to definitely recheck. She also mentioned that she doesn't like to see anything less than 15 db as sounds can become distorted any lower than this. She's going to take a look at his maps (programs) and test him in the soundbooth. I love this place.

The school's OT also joined our meeting as they have concerns about Aiden's muscle tone and the fact that he's the only one in his class who is still not walking. They're not overly concerned, but want to evaluate him more and work with him to help him along.

Aiden's sister was a late walker, but her pediatrician was never concerned. She also never crawled, she walked on her knees to get around ... also, no concerns. What I've learned is that skipping the crawling stage can hinder fine motor skill development and muscle tone for years to come. To this day Kailyn's handwriting is not that great, her muscle tone is weak (she's in gymnastics to help this), and even the muscles in her eyes are weak (we just increased her glasses Rx for the second time in 6 months). I wish I had known then what I know now. I'm sure she would've qualified for OT services and there's a good possibility she still may. Just another battle I'm working my mommy magic on.
Anyway, I say all this because if this is a service Aiden's school provides and Aiden will benefit from it (even though this is something else we have to add to our plate of craziness), we're definitely going to take advantage of it. Again, love this place.
I have to say my concerns for Aiden aren't that he's not doing well. I believe my little man is doing a wonderful job with his CIs and coming along beautifully. But I feel we're stuck and I am truly concerned about his map. I need to validate if my concerns are right or wrong. If they're right, we'll get it fixed and move on. If they're wrong, then I will see what I can do differently and continue to work hard on next steps.
My main concerns are:

To end, I have to share a recent video of my little monkey. All these concerns, and then he does this. Here he is showing off his mouth parts and demonstrating his progressing "h" sound (which he picked up by me saying "hot" every morning as I let him feel my coffee cup).

I love to see your video clips and hear his little voice. Sounds to me like he was saying, "Hair", without the "r"!

And, oh my goodness! When I saw the pic at the top of the post with all those teeth I was amazed at how much he's a little boy,, and not a baby!

sometimes you need to sit back and relax and breath. You seem to be extremely stressed out. Your son is deaf, and he can actually hear sounds.... enjoy your and his life. Maybe put away the charts and the constant testing for a day or two, give him some time to let stuff sink in.

Glad that you've got some great support from Aiden's school. That certainly is strange about the MAP not being changed though. We get new MAPs weekly at the moment but have told they'll be monthly for at least a year.

Girl, we really do need to talk. I have questions about Apples & Leaves and about what the River School audiologist said. Are you free Thursday night?

I emailed you and may have sent the email to your Texas email address. We need beer/wine & chats!

I'm so glad you're following your gut and pursuing this, hon. And with good support too! Good luck :)

Love the HHHH! Sounds great to me. He is just darling.

My advice is ALWAYS trust your gut. Mommies know best.

Sorry I'm behind on my blog reading. First... I love Aiden videos! He's growing up! He sure knows his body parts, and I think the /h/ is wonderful!

Glad you're following your gut. Lucas attempts some of the ling sound repititions, but eee and ooo sound the same, and /sh/ is not really there. I, too, wonder what he's actually hearing. Some day soon, they'll just be able to tell us!!!!

I see you're still trying the BTE setup! Hope that continues to work!

Julie - definitely turning into ALL little boy ... but one that hugs and kisses his mommy!

Me - You're right, there are times I have to tell myself to relax, slow down, but I'm not stressed - just concerned - life's too short for stress, been there done that. If I don't voice my worry about him though, noone else will either. Believe me, I enjoy my life with him and my other two every.single.day.

Naomi - the appts will slow down soon, promise. The beginning is just pure craziness!

Jen - When are we getting together again!?! I miss you all! and we finally have the whole BTE set up working full swing! I love it!

Good for you for following your gut and getting a second opinion!!
We are our kids best advocate and we see them daily, so we really know what is going on. Sometimes I think Allison is having an off day when she goes to her mapping appointments.
I love the videos of your little guy....he is growing up so fast.
I think it is great that you have found a great school, what a blessing. We feel the same way about the school Jared and Allison went to for preschool and now for elementary school.

I just read through your last few posts and good for you in getting a second opinion. It is interesting to read all the other CI's comments along with your posts. It gives me an idea on how a mapping, sound booth testing, language development, etc.. unfolds.

Thursday is perfect. I'm meeting with the state tomorrow morning and can give you the download on the parent-to-parent network. Can't wait to talk!

AND I think you should voice those frustrations. It would be unhealthy to just walk through life with ones head in the clouds so to speak.

I was just saying that sometimes I find myself in the panic, worry, frustration, confusion, black void of despair and once you head into that rabbit hole its hard to get any sort of bearing. Until it just works itself out. Which, when it works itself out you go, wow I just wasted all that time making myself sick instead of just taking a deep breath and looking at the good things, or seeing the real progress being made.

I guess what I am trying to say is, sometimes we need to be reminded to stop, breath, and enjoy.

Anyway, I hope this all makes sense. Keep plugging away.

Hi Me,
I totally hear what you're saying and I appreciate it. Truly. Because you are absolutely right, sometimes we need that little reminder, especially in this journey, where it is so easy to get caught up in a worry whirl wind. That's what I love about this network, because sometimes I need to hear moms say too, "whoa - you really do need to get that checked out", that reassurance. It's such a balancing act, and it's nice to have such great support in all directions! : )