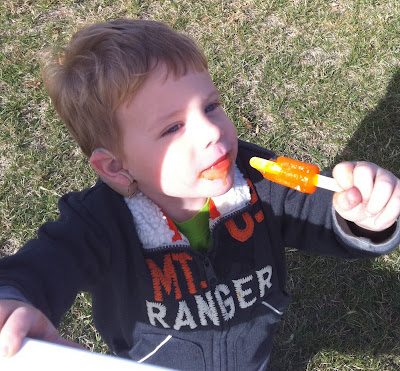 There's not a day that goes by that we don't appreciate the miracle of Cochlear Implants.
Nearly everyday I have a a story for daddy or grandma about something Aiden heard or said.
Then there are some days, like today, where I'm completely nonstop,
running from appt. to appt., that I realize, it's truly about the simplest things.
The simple things, in the moments of craziness, that make me stop and cherish;
yes, completely STOP and CHERISH;
the teary eyed moments;
the moments I SMILE and WHISPER, "Thank you God."
Such as today,
when my phone rang (old style ring tone) and he pointed to his ear, HUGE SMILE on his face,
and belted out, "I erd at! Hewo!"
when I asked him in the car, without turning around, "Aiden are you hungry?"
to which he replied, "NO!".
"You don't want to eat?", I asked again. "No, no, no, no, no!"
when, moments later, I spelled out S-T-O-P (without saying the word), to which he yelled back, "STOP!"
and just seconds later as we pulled into the drive, "Yay, house!"
(again, this was after being gone all afternoon at appts)
when I sang to him as we drove to therapy and he told me, "No",
which I ignored and continued to sing, since "NO" has become the word flavor of the week
(and let's hope it loses its flavor and doesn't last much longer).
Then when I didn't stop, he tore off his CIs and gave me his first true shit eating grin.
Ya. Tell me I wasn't trying to hide my laughter.
when I called his name from the kitchen as he sat playing Wii in the family room with his big sister
(great language opportunity btw).
He turned to look at me and I said,"Daddy has your bath all ready."
To which he jumped up, ran down the hall to head upstairs,
and I said, "Aiden wait. Mommy needs a hug."
To which he turned around and ran to give both his sister and me a big huge hug.
Yep, it's the things that can seem that simple,
that really aren't
that simple.
at 6:37 PM

I love these - simply love them!!

i AGREE! love these many moments scattered throughout the day.

Love it!, he looks sooo grown up! No more baby face!

This is the kind of day that makes it all worth it.
Love, Love it!!!!