Out of the Booth Audiology 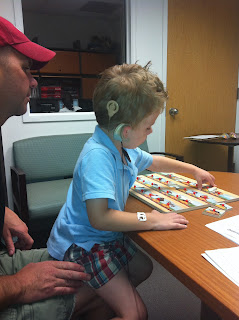 Here is a more detailed account of our recent "out of the booth" experience at the audiologist's.

In the past, Aiden's mapping appointments always started with him in the soundbooth - test lings, create audiogram based on his conditioned responses using pure tone audiometry (or sometimes warble tones), measure speech recognition (repeat for each CI separately, then together). Then head back to the audiologist's office and adjust CI programs based on new audiogram and parental feedback of ling checks, voice quality, spontaneous language use etc.

This appointment went more like this (I'll do my best to explain it, but let me preface by saying I am by far not a professional audiologist. I know enough about mapping to be dangerous and explain it to the best of my knowledge.)

After all this, we would ultimately bring him to the soundbooth, but after two plus hours, he was spent. We are heading back in two weeks for a new audiogram. I can say though, that the days following, I'd sporadically ask him how things sounded, and before I could get out the choices of too soft, good, or too loud, he'd throw up his thumb and tell me, "good!"

During the whole appointment, my little monkey entertained. What cracks me up is he knows he's funny and laughs at himself. A few times throughout, his audiologist would cover her mouth and tell him to listen, and before she could get anything out, he'd yell out, "ah, oo, ee, s, sh, m" then laugh and laugh. Or she'd say a letter sound, and instead of imitating it back, he'd tell her what letter it was, then laugh some more.

After four days with his new map, I still see very good changes in his speech, but he still sounds very jumbled when putting more than two or three words together. Even though his technology definitely needed a good tune-up, he still has motor planning challenges, which is why we will continue on strong with OT. As Aiden strengthens and overcomes his praxis challenges, we should also start to see an increase in his conversational speech. I think this is going to be a GREAT year for him!
at 8:00 AM

I love, love, love your dedication to getting this set up for him with his local audiologist! What a fabulous way to test and program CI's! Here's to clearer sound (and clearer speech) with the new MAP!!

Tammy,
You are the BEST advocate for Aiden. You are figuring this out, with a great team! Congrats on the awesome progress!!!