Let me paint the picture ...


Aiden's brother and sister are finally back in school; I'm trying to get Aiden back into OUR daily routine - which includes trying to get him back into a nap (more so for me); and while he naps, I of course, try to finish a thousand and one things, including craziness like washing all the bedding and starting dinner in the middle of trying to fill in the blanks on posts I started ages ago yet are still in limbo out in never never land waiting to be finalized and probably never will.


and then, when I think I have him on task, when all is quiet above, I creep up the stairs (as many times as I remind other's he cannot hear without his CIs, I still find myself "creeping" up to his room to "peek" in quietly. Why? Who knows.) just to check, because when it comes to Aiden, "quiet" typically means "trouble".


As in this case.


Most of you know how I've checked on Aiden before during naptime to have every.single piece of clothing pulled out of his drawers, every.single.wipe pulled out (to which I stuffed every one right back in), even a pants full of poo torn off and left in a corner. I thought we were over this and he was back to actually napping instead of destroying. 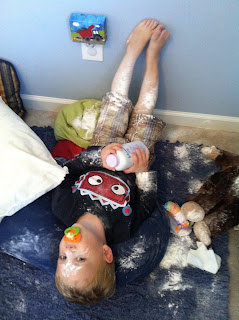 I think he's done with naps and even more importantly I think I need grandma closer by. The (not-so) funny thing is, is that I was in the process of deep cleaning his room. Maybe he thought he was helping.


Here is the video I took after I put his CIs back on to talk about what he had done. I sound like mommy dearest, but was honestly trying hard to hold back from laughing and letting him think it was all ok.


(make sure to turn off the music to the right)

The first video has captioning, but for some reason doesn't work on all computers (works on my Mac, but not my desktop), so I added a noncaptioned one directly from YouTube.

Email ThisBlogThis!Share to TwitterShare to FacebookShare to Pinterest
Labels: just for fun, life with Aiden, video

Boo...I couldn't see the video. He is quite a character!! Love it.

The video isn't working (youtube threading is disabled??) but the picture is hilarious. At least for me, since I didn't have to clean up all the powder, lol!

He is such a character- I *heart* him!

Hmmm. I wonder if it has anything to do with the video being from my iPhone? Weird. Anyway, I put on a video without captioning and one directly from YouTube, just in case the other decides never to work! and yes, just like all of our beloved toddlers/preschoolers, he is quite the character! We really are lucky mommas! ; )

I meant WITH captioning. oops

I meant WITH captioning. oops

He is quite cute despite the mess he made. And you were so calm...not sure I would have been. :)

I think all of us has a picture along those lines with our two year olds and Ava has done the "poo pants thrown in the corner" several times hahah. What I noticed from your video was how well he could listen and hear you. You were talking in a not too loud not too soft voice and he heard and understood EVERYTHING you said to him and he DID everything you asked him to too. He's a smarty pants!

What a surprise to walk into! Little turkey!

But - wow - he WAS hearing and understanding all of what you said, and trying to clean up.

You speak at such a great rate with him. I often talk too fast to Thomas...thanks for inspiring me to slow down!