For Hearing, Not Teething!

Aiden has really been taking out his hearing aids EVERY CHANCE HE GETS lately. I put them in, he takes them out. The other day I counted 20 times of in and out, all within thirty minutes! I was going to try and count all day, but lost hope. I thought with him wearing them since he was 10 weeks, we wouldn't have a problem with this. Wrong. The other day, I heard a bunch of buzzing (which is so normal in our lives), knowing he had them out. Sure enough. I think he's mistaking them for his teethers. He's like Speedy Gonzales ... one and then the other ... I can't get there to stop him fast enough! And one inevitably makes it into his mouth and then he looks at me like, "Don't you dare touch it." (I found the other one from this pic on the floor!) 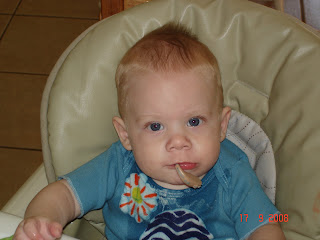 So our solution ... pilot caps! After a few days of constantly in & out, I finally ordered some and they were here in less than a week. So for now, we're saved! Only problem, I measured his head a bit too small and he STILL can get them out ... just not as fast as mom can get over there to fix it though!(Oh, and that teether thingy in the picture is GREAT too! I think you get them at Target. We stick ice cubes in there for his teething. When they get older you can stick fruit in there. The covering is mesh so just juices come out. Aiden goes crazy with it!) 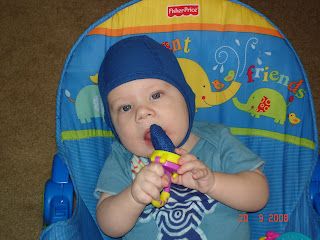 We went through this for several months as well. For an extra level of security, tape the molds to his ears with paper medical tape. Then put the pilot cap on.

Marielle grew out of the habit around 13-14 months. Good luck!

Nolan's almost 13 months and has just outgrown it- for the most part! Yesterday he took one out and was munching away on the aid. I looked at him and said, "don't make me get the cap out, boy!"

Oh my goodness he looks so much older -- not like a newborn anymore! Too cute!

"Don't make me get out the cap, boy" = the funniest thing I've heard all week!

You have me cracking up here Leah!!! Yeah, those caps aren't exactly the newest fashion statement for boys, but they help get the job done! One day I'm sure Aiden will look back and ask "what were you thinking?"

I love the cap! I think he looks
like a young Michael Phelps...and
one day Aiden just might beat all of his olympic records! Too cute!
Leah, Sherry & Caden

I had to break the caps out for this same reason this weekend! It's amazing how quick they are, isn't it?