Since the day we found out Aiden was deaf, amongst many of the things we worried about, we worried about literacy skills. We started working on this right away by reading to him everyday. We were told by our first AVT to read, read, read, read. In fact, we were given the number TEN - yep, ten books a day. Of course we didn't get in a full ten everyday, but we tried, and even if we got to three, we felt good. Although we know this is important for ALL of our kids, we knew it was especially important for Aiden, as any child, who has challenges with speech and language, needs so much more help and encouragement on pre-literacy.

Aiden learned his alphabet pretty early on, around two to two and a half. We've also been very lucky that he has always shown a love for books, which I attribute to the 10-a-day rule. Experience books are another way to not only build language, but work on pre-literacy skills. I wrote all about our experience book HERE. With Aiden's interest in books, and his early learning of the alphabet, sparked his interest to take it to the next level, and with our help, he attached the sound to the letter and started to recognize that letters together, create words. About six to eight months ago, I noticed he was "reading". I would present certain words in writing, and he would find the picture to match - such as house, boy, star, ball, boy, cat, etc. THIS is a great book to practice this. In fact, we love all of Eric Carle books. Aiden can read THIS one by heart, which has also helped in elongating his sentences, learn his colors, put an adjective with a noun, and again, realize words have meaning.

So to take it even a step further, I started sounding out words for him, without a picture, and he would put the letter with the sound and hence, spell simple words. OR, we play the sound game, I say (CAR) and he tells me what letter the word starts with. I believe a lot of what he knows too, he has seen in books or heard in songs and nursery rhymes - again, a great reason to read, read, read and sing, sing, sing! In fact, Aiden learned how to spell his name and mommy from a song I changed up using our own names, from the Tune Ups CD which is a part of the Advanced Bionics Listening Room. Also, if you google pre-literacy, you will come up with a ton of websites with different ideas. This is a great website for some basic ideas and background on pre-literacy.

Our next step, rhyming words and words that are very close minus a letter (lie vs. light).


First, a sampling of his writing, which is a also a big part of literacy. He did this all on his own, without me spelling it for him. Notice the "y" in mommy is under his own name, which he realized he left off after he was done. 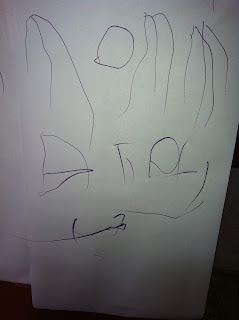 Here is video sampling of Aiden's pre-literacy skills. He gets a little silly, but that's always the fun part. I included a little extra for a small speech sample. He's a bit nasally, as he has a stuffy nose, which isn't unusual for him. AND I had no clue how to get that dang "directed by" off the end. oy.
BONUS - with him voicing the sound each letter makes, I get a good sense that he's hearing it correctly. This all goes back to our most recent mapping strategy, which has made a world of difference with his pronunciation of so many words!

Turn down the tunes and listen to my boy go.

That is AWESOME! He is doing amazing things!

I've been out of the loop for awhile and just catching up (three week road trip) and hurray for Aiden! And you :D

pTammy, I am floored. Seriously, he is a rockstar. Can't believe he wrote that - truly amazing! Go Aiden!

THAT is fabulous! WOW. Look at his writing! Nolan can't write anything yet - just the "O" in Nolan (mild fine motor delay since Nolan is 4). Aiden is really doing fabulous!

just thinking of you and Aiden
and I'm so happy to see his progress, that's faboulous and sooo encouraging Aiden is really a little rockstar :)
A Big big big hug

This is great! I'm impressed that he can write and knows his letter sounds so well! Way to go, Aiden!

awesome. love reading this blog makes me so happy that he is doing so well. love itttt!